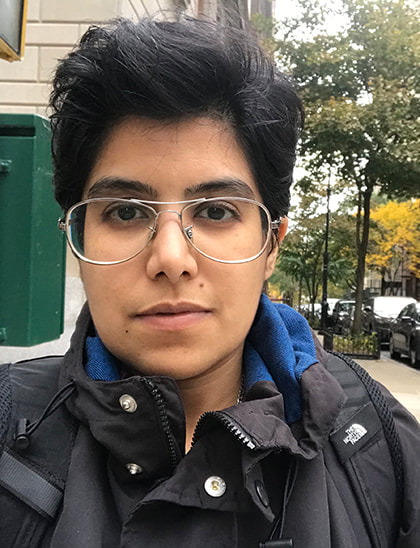 ​Her work appeared in: The Norton Anthology for Hint Fiction, One Jacar, Nimrod, Sukoon, Gulf Coast Journal, Amethyst Review,​ The American Journal of Poetry, Tribes, The Indianapolis Review, No Contact, and more. Her essays and interviews on culture and politics in the Middle East have been published in: Fanack Chronicle of the Middle East & North Africa (Netherlands), Economic and Political Weekly (India), and Kuwait Times, Arab Times, The Times Kuwait, bazaar, Khaleejesque, CityPages, Ink & Oil, and en.v (Kuwait).

Courtesy of Kuwait's Ministry of State for Youth Affairs, Faris participated in Iowa University’s International Writing Program (IWP) Fall 2013. In 2015 and 2016, she joined the Board of Trustees for the Cultural Circle Prize for the Arabic Short Story (Almultaqa), the first international award for short story collections in Arabic. Furthermore, Faris is the recipient of a 2016 MENA Salam Fellowship from World Peace Initiative Foundation (Peace In, Peace Out) where she meditated with Buddhist monks in Turkey. In April 2018, she was selected by the US Embassy in Kuwait to participate in the International Visitor Leadership Program (IVLP): Empowering Youth Through the Performing Arts, and she received in the same year an Arab Woman Award from Harper's Bazaar Arabia in the category of Inspirational Woman for her impact on Kuwait's creative sector.

Faris earned a BA in English Language & Literature and a Higher Diploma in Comparative Literature from Kuwait University. Furthermore, she holds an MFA in Creative Writing from Columbia University (concentration in poetry and translation).

​For more on Faris's experience -- and for a full resume -- please visit the Events page.
FOR TEACHING & SPEAKING ENGAGEMENTS
​Nada Faris is a writer and performance poet who educates students in social, political, economic, and environmental topics through a creative writing lens. Using the exploration of literary history, theory, language, and writing craft, Faris inspires students to examine critical ideas that shape what it means to be humans, civilians, and members of diverse (and complex) communities.

​​If you are interested in booking Nada Faris for speaking engagements, poetry performances, or creative writing workshops, please send all inquiries to:
info [dot] nadafaris [at] gmail [dot] com